I first heard about Andy James in 2005 when I was setting up Alloutguitar.com and was on the hunt for a team of the hottest UK up and coming guitarists to join the team of - arguably - the first online guitar magazine. Andy’s online videos showed clearly that this guy was a phenomenal guitarist, but nothing prepared us for how he blew everyone away when he played on our stand at the 2006 London Guitar Show at Wembley: simply world class. All the chops and techniques of a Paul Gilbert or a John Petrucci, but also possessing a fully developed, hard core - yet supremely melodic - take on shred/metal guitar playing that was uniquely ‘Andy James’. This guy could not remain under the radar for long, he was too good…

Several years on and it looks like Andy’s delivering on the promise of those early days – through his worldwide Youtube fan base, genre leading DVD tutorial and online tuition with companies such as Licklibrary and Jamtracks, acclaimed solo albums and worldwide tours and major album releases with Sacred Mother Tongue already behind him – plus the prestige of ESP launching the signature Andy James guitar - Andy’s risen through the ranks to become arguably the UK’s greatest shredder. When my first guitar tuition book From Zero to Rock Hero was published in several languages in 2009, Andy approached me with the idea of producing a series of books that would demonstrate his guitar style. A definitive guide to cutting edge rock, metal and shred guitar for the 21st century – not just a selection of licks and tricks, but an in depth guide to the theory, stylistic influences, techniques and playing approaches that helped build Andy’s style – all explained and demonstrated step by step so that guitarists the world over can apply these to their own playing. Now, as 2014 dawns, we’ve taken that tutorial concept a stage further by including all these themes into an online course presented through the Andy James Guitar Academy: with regularly expanded, and updated fully Interactive content this goes way beyond a humble book and is designed specifically to give you the best chance possible of becoming a monster guitarist! Happy shredding, and I look forward to seeing you again for the next Course! Owen Edwards Cambridgeshire, UK 2014 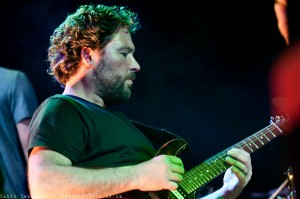